In late April we were alerted to a small dog running loose who looked like he really needed help. Kind people were trying to catch him but couldn’t get close enough. This poor little guy was severely matted and very dirty. His hair blocked his view and he seemed like he wanted to trust but was unsure - he barked, growled and wagged his tail all at once.

We tempted him with some wet food on a spoon, which he ate while keeping his distance, and after following him into a wooded area where he likely lived, he got cornered near a fallen tree and we were able to get a leash around his neck. Once caught he was pretty calm.

After a brief stay at the local humane society to see if he was missing and get the immediate care he needed, Eddie came back into our care. He was pretty nervous, given all he’s been through – he would growl and bare his teeth. In the course of a few days, and with his foster mom’s gentle approach that let Eddie decide what he was okay with, he has started to seek out attention and belly rubs, and he really enjoys going for walks!

A vet visit revealed he has a hernia and Lyme Disease. The hernia was repaired during his neuter surgery. Once he recovered and the Lyme Disease was treated, lucky Eddie had a loving, forever home waiting for him. 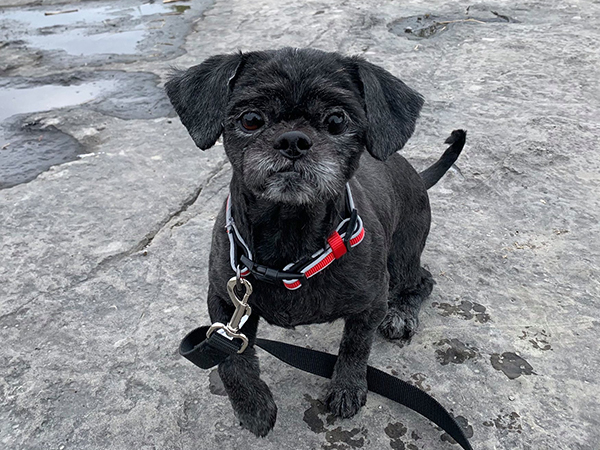